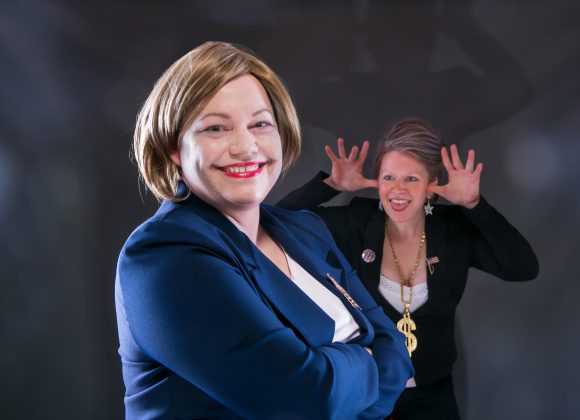 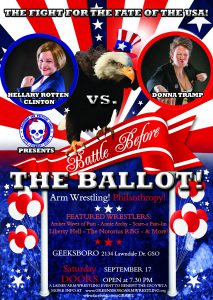 Join us this Sept. 17 for GRAWL Brawl III: Battle Before the Ballot at Geeksboro.

Eight women will face off in an arm wrestling match fit for a presidential candidate. Wrestlers Donna Tramp and Hellary Rotten Clinton will take time off the campaign trail to have a presidential cat fight! Wrestlers Amber Waves of Pain, Liberty Hell, Annie Archy, Scara Palin and Babe Lincoln will also make an appearance. This event is NOT TO BE MISSED.

DJ84 will be spinning through the night. Doors open at 7 p.m. Wrestling begins at 8 p.m. General Admission tickets will be available online at the Geeksboro website in August or at the door the night of the event. All proceeds will benefit the YWCA Greensboro’s Family Shelter.

The Greensboro Arm Wrestling League (GRAWL) is an all-volunteer fundraising organization that aims to help our community through badass, progressive theatrical events. Our colorful lady arm wrestlers entertain the crowds while raising money for Greensboro nonprofits that serve women and girls.
0